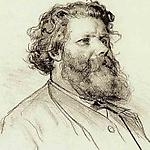 In 1858 Théodore Deck, once an itinerant fabricator of tile stoves, established a Paris atelier where he worked tirelessly to rediscover the lost process of transparent enameling. He is best remembered for his brilliantly colored glazes, including the famous "Deck blue," first shown in 1874. Until his appointment as Director of the Manufacture de Sèvres in 1887, his production was prolific. In his role at Sèvres, he trained the next generation of ceramists, including Edmond Lachenal and Émile Decoeur, who helped him overcome prevailing academicism and become one of the leaders of the French ceramics revolution.

At the age of 33, Deck accepted employment as foreman of a popular stove factory in Paris. Meanwhile, having a long-held interest in chemistry, he was preoccupied with the rediscovery of the lost process of creating transparent enamels. Deck founded a workshop in Paris in 1858 and only three years later won a medal at the Exhibition of Industrial Arts in Paris for faience inspired by Saint-Porchaire wares.

In 1874, Deck presented his brilliantly colored glazes, including the famous "Deck blue," at the Exhibition of the Union Centrale. He was inspired by Iznik pottery and also by Assyrian, Hispano-Moresque, Chinese, and Italian Renaissance ceramics. After the World's Fair of Paris in 1878, the Legion of Honor awarded him with a medal.

Deck trained the next generation of avant garde ceramists, including Edmond Lachenal and Emile Decoeur. Thanks to the presence of such talented young designers in his workshop, he was inspired to adopt the new aesthetics that shifted the constraints of historic revivalism. According to Deck's obituary in the New York Times (May 26, 1891), it was "at the Exhibitions of Decorative Arts, in Paris in 1880 and 1884, [that] he attained world-wide celebrity with his vases, red, turquoise, Deck blue, and other colors, limpid, profound, and dazzling." The obituary goes on to report that, "Deck died at Sèvres, in the little pavilion—with rooms of gold, satin, and velvet, filled with vases painted in manganese violet and eel yellow colors, lacquers, netsukes, and swords of Japan…. He was inseparable from his surroundings; he wore the air of their art and charm as if he had been born among them." 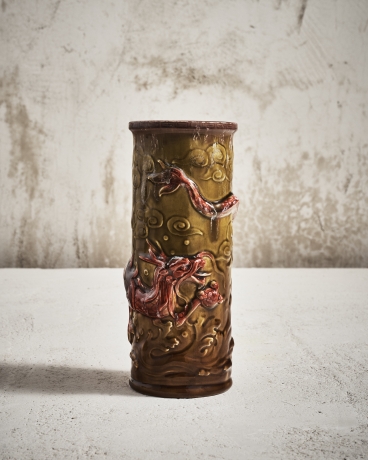