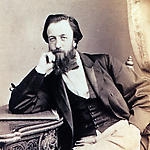 Among the first independent industrial designers, Christopher Dresser championed design reform in 19th century Britain while embracing machinery in the manufacture of wallpaper, textiles, ceramics, glass, furniture and metalware. Although trained as a botanist, he established a design studio where he produced much of his influential work. After the late 1870s, he supplied designs to smaller firms that allowed him greater control over products. In the field of ceramics, he created drawings for Linthorpe Art Pottery and Mintons, often relying on designs in Owen Jones's Grammar of Ornament (published in 1856) for inspiration. Born in Glasgow in 1834 into a non-conformist family, Dresser was an exceptionally talented child. At the age of 13, he was enrolled in the newly established Government School of Design. This new system of art training was set up to improve the standard of British design for industry by joining the disciplines of art and science. During his studies there, Dresser met many of the most important design reformers of the day, including Henry Cole, Richard Redgrave, and Owen Jones.

Having specialized in botanical studies, Dresser became a lecturer in botany when he left the college in 1854. He wrote three text books on botany which were well received. However, after failing to win the Chair of Botany at the University of London in 1860, Dresser turned his efforts towards design – setting up a studio at his home in St. Peter Square, Hammersmith. His study of plants had a profound effect on his approach to design. Seeing nothing superfluous in nature, where every beautiful thing had simplicity of form and a clear function, Dresser applied the same principle to industrial design.