The Jason Jacques Gallery announces the opening of Spring Dance, a joint exhibition featuring new work of Michael Geertsen and John Souter. Each artist expands the limits of the ceramic medium and the preconceptions and connotative biases with which it is viewed. There will be a reception for the artists on April 4, from 6 to 8pm, and the exhibition will be on view at 29 East 73rd Street through April 26th.

Michael Geertsen, a Danish sculptor, is known through his works’ interrogation of the cultural and artistic places that ceramic inhabits, as well as its position in the future. His work is assemblages of thrown, cut, and rearranged forms that are glazed in striking, bright colors, and placed in exacting positions. They exist in a world between still life and sculpture, on the cusp between imagined utility and brokenness. His intention is not to copy nor imitate, rather “to quote the proportions and form of the vase.” Geertsen inverts all of the aspects of a ceramic object that seem to signify functionality— a rim, a leg, a handle— and in doing so reminds the viewer both of the medium’s origins in necessity and its boundless potential.

John Souter, an American visual artist working in Philadelphia, used mixed-media, rich texture, and vibrant hues in his work to push past notions of purity and to present ceramic as a versatile material in dialogue with other mediums. Beyond the formal qualities of his abstract-figurations, Souter’s works question not only the boundaries of clay but of sculpture itself. They stand on their own plinths and pedestals, or contain themselves within cases, blurring the boundary between the whimsy of the art object and the pragmatism of display. Drawn to observation and reflection, Souter deals with issues of origin and being, asking “When does a thing die? When is a thing born? At what point does one transition into another to become a thing that is stuck in innocent gesture?”

Spring Dance is a part of the Jason Jacques Gallery contemporary program and its larger dedication to showing works in its historic East Side location in ongoing dialogue between past and present. 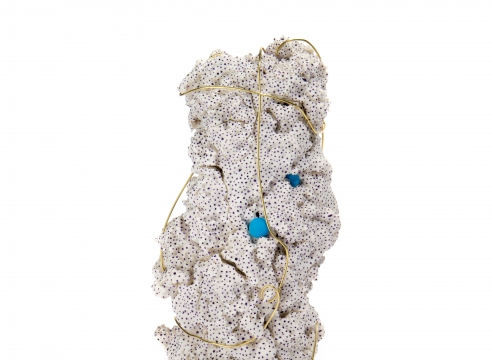