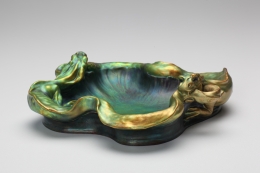 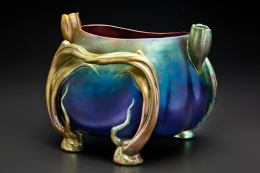 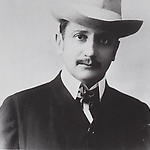 In 1853, Miklos Zsolnay established a ceramics company that supported an art pottery division. The company quickly became internationally acclaimed. In 1893, under the influence of Clément Massier's lusterware, Zsolnay's chemist developed a rich iridescent glaze, marketed as "eosin." The term, named after the Greek goddess Eos, goddess of dawn, was soon to be used to denote the rainbow-hued iridescent finish. Used in combination with etching and gold luster, it appeared for the first time in winter of 1899-1900 in Vienna. Following the trends of Art Nouveau and Jugendstil, the newly developed glaze was applied to fantastic sculptural works. Paired with flamboyant color schemes, eosin glazes were applied to free-standing sculptural ceramics as well as simpler vases, achieving results that recall Fauve landscapes and Tiffany motifs.

Figurative subject matter— which include pictrures of women, animals, and mythological subjects - were occasionally painted onto the ceramics' body. Miklos Zsolnay, who had experience operating another ceramics factory in Hungary, relocated his business to Pecs, a town in the country's southwestern region. His son Ignaz directed the firm from 1854 until 1868, when he turned it over to his younger brother, Vilmos. To address problems of expensive clays and labor, Vilmos provided the factory with a supply of raw materials through the acquisition of key sites such as riverbeds. He also established a school at the factory. The mass-production of standard industrial and decorative wares provided the firm with financial security and supported the art ceramics division of the company throughout the 1870s. In the 1880s, the factory collaborated with architects in the production of interior tiles and bathroom fixtures made of terracotta.Because of technical improvements at the factory—including freeze-resistent tiles and the production of durable road cobbles made of stoneware— Zsonlay gained popularity abroad. Despite the variety of form, decoration, and subject, almost every piece to emerge from the factory is instantly recognizable as the product of Zsolnay.

Zsolnay's worldwide acceptance was due in large part to Viennese merchant Ernst Wahliss, who was Zsolnay's sole international representative. Their masterpieces won awards at the Weltausstellung Wien, 1873; The Exposition Universelle de Paris. 1878; The International Exhibition, Sydney, 1879-1880; International Exhibition Melbourne 1880-1881, Exposition Universelle Paris 1889; the World's Columbian Exposition, Chicago 1893; Exposition Universelle d'Anvers (Antwerpe), 1894; Exposition de Nice, 1894-1895; and Exposition Internationale de Bruxelles, 1897. Some of the noteworthy artists who worked at the Zsolnay factory were Tade Sikorski (1852-1940), who married Julia Zsolnay, daughter to Vilmos, and became the principle designer for the factory from 1890-1910; Jozsef Rippl-Ronai (1861-1927), a Nabis painter who participated in designing and painting ceramics; Walter Crane (1845-1915), a Pre-Raphaelite painter, who visited and worked at the factory; Sandor Apati-Abt (1870-1916), a Symbolist painter (Abt's designs are some of the most dynamic and prized by Zsolnay collectors); Lazslo Mack (1876-1963), who designed for the Zsolnay factory during the Art Nouveau period, and is most well known for he figural ceramic vessels; Mihály Kapás Nagy, Henrik Darilek; and Julia Zsolnay (1856-1950), the second daughter born to Vilmos Zsolnay, who became an influential designer and painter. 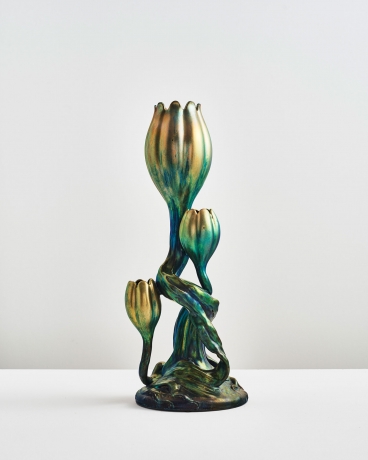 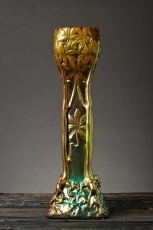