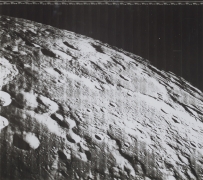 FOR RELEASE: October 17, 1967
PHOTO NO.: 67-H-1400
WIDE ANGLE FRAME M-102
Hampton, Va., -- This photograph was taken by Lunar Orbiter V of site V-25 in its mission to photograph selected scientifically interesting areas on the front and far side of the Moon and supplemental photography of candidate Apollo sites. This frame was taken by Orbiter V's 80 mm focal length wide angle camera. The area shown is the Alpine Valley which is located at approximately 48º55 mins. North latitude, 3º00 mins. East longitude and is situated between Mare Frigoris and Mare Imbrium. The mean lunar distance across the photograph is approximately 286 miles. When viewed with the band of edge data at the left, North is approximately at the right and the Sun is at the bottom at an angle of approximately 16.2º. This photograph was taken on August 14, 1967. Lunar Orbiter V was at an altitude of 153.5 miles when it took the photograph. The Lunar Orbiter project is managed for the National Aeronautics and Space Administration by Langley Research Center, Hampton, Va. The Boeing Company, Seattle, Wash., is the prime contractor.