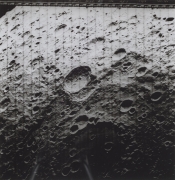 This photograph was taken by Lunar Orbiter V of site A-10, in its mission to photograph selected areas on the front and rear of the Moon and supplemental photography of candidate Apollo sites, This frame, taken by Orbiter V's 24 inch focal length telephoto camera, consists of 24 of the 65 framelets which make up a complete telephoto frame.

The area shown, a portion of the Moon's back face near Mare Moscoviense, partially satisfies the task of Orbiter V to increase the detailed coverage of the far side. The area shown is approximately 86,000 square miles. North is approximately at right and the Sun is at top. This photograph was taken Aug. 8. 1967, and relayed to the Madrid, Spain, station of the Deep Space Network on August 26. Lunar Orbiter was at an altitude of 3113.4 miles when it took the picture.

The Lunar Orbiter Project is managed for the National Aeronautics and Space Administration by Langley Research Center, Hampton, Va. The Boeing Company, Seattle, Wash., is the prime contractor.