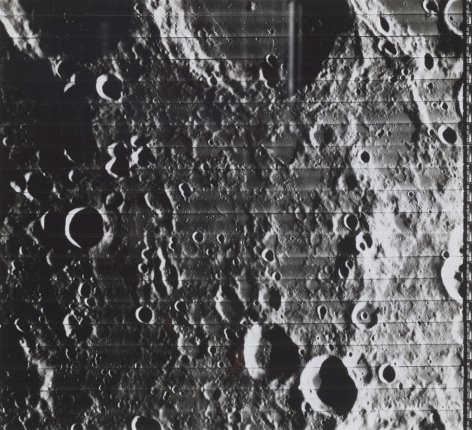 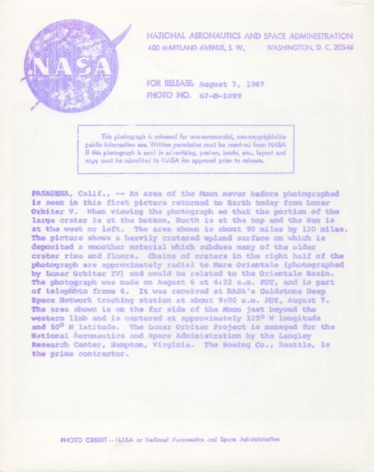 An area of the Moon never before photographed is seen in this first picture returned to Earth today from Lunar Orbiter V. When viewing the photograph so that the portion of the large crater is at the bottom, North is at the top and the Sun is at the west or left. The area shown is about 90 miles by 120 miles. The picture shows a heavily cratered upland surface on which is deposited a smoother material which subdues many of the older crater rims and floors. Chains of craters in the right half of the photograph are approximately radial to Mare Orientale (photographed by Lunar Orbiter IV) and could be related to the Orientale Basin. The photograph was made on August 6 at 4:22 a.m. PDT, and is part of telephoto grame 6. It was received at NASA's Goldstone Deep Space Network tracking station at about 9:00 a.m. PDT, August 7. The area shown is on the far side of the Moon just beyond the western limb and is centered at approximately 105 W longitude and 50 N latitude.

The Lunar Orbiter Project is managed for the National Aeronautics and Space Administration by the Langley Research Center, Hampton, Virginia. The Boeing Co., Seattle is the prime contractor.