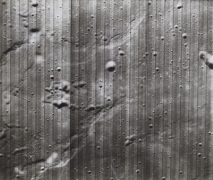 This is moderate resolution frame number 76 taken on August 23, 1966. The photograph is the twelfth of sixteen taken on site A-3 which is located in the Sea of Tranquility. When viewing the photograph, with the identification number in the upper right-hand border. north is approximately at the top and the Sun is on the right at an elevation of 21º from the horizontal. The area of the Moon's surface shown is about 23 by 27 miles. The center coordinates of the photograph are approximately 26º45' east longitude and 7º30' north latitude.