Object & Thing, a new art and design fair scheduled to run in Brooklyn in early May, is shaping up to be quite a bit different from most such events.

For one thing, it will be small—just 32 international galleries are participating in its inaugural edition, which runs May 3 through 5, during Frieze New York (which, by comparison, brings some 190 exhibitors to Randall’s Island). Even more notable is that there will be no single-gallery booths. Instead, organizers plan to present more than 200 objects, priced between about $1,000 and $50,000, as an uninterrupted exhibition, for which Rafael de Cárdenas serves as artistic director, at 99 Scott, a 5,000-square-foot venue in Bushwick that some may know from various art-world galas and fashion shows held there.

But what is perhaps most dramatic is that, instead of charging exhibitors to present work, Object & Thing will take a commission on sales, which will be managed by fair staff. (Spring/Break Art Show is one of the only other fairs that operates on that commission-based model.) Abby Bangser, the founder of Object & Thing and former artistic director of Frieze Art Fairs for the Americas and Asia, told ARTnews that she “tried to drop as many barriers as possible” to enable galleries of different sizes and statures to show wares at the event. Because her team will be handling sales, participating dealers need not even visit the show.

Among the multifarious offerings at the fair, which focuses on contemporary and 20th-century art and design, will be ceramic works by Ann Agee, backgammon tables with inlaid metal by Zak Kitnick, painted aluminum stools by Donald Judd, fiber works by Alexis Gautier, and Alan Shields’s hand-painted boxes and handmade jewelry. Works presented by the galleries will also be available for purchase online during the weekend of the fair.

“The idea was really to equally balance and represent art programs and design programs,” Bangser said, emphasizing the wide range of material that will be on view. “I’m really happy that it’s very international while also being able to include a lot of local New York programs.”

She noted that, due to their smaller scales, many of the works in the fair often have “very few opportunities to be exhibited in the current commercial context” or in museums.

In addition to its central selling exhibition, Object & Thing will assemble nine boutiques that will sell homewares, publications, and other items, most of which are priced at $100 or under. A few of those purveyors are London’s Momosan Shop and Los Angeles’s The Good Liver. Also planned is a series of talks with artists and curators overseen by Glenn Adamson, former director of the Museum of Arts and Design in New York.

The Shop, as that modestly priced section is called, “is bringing together a community that doesn’t normally convene,” Bangser explained, adding that Object & Thing has been organized as “a very accessible and inviting place to be.” 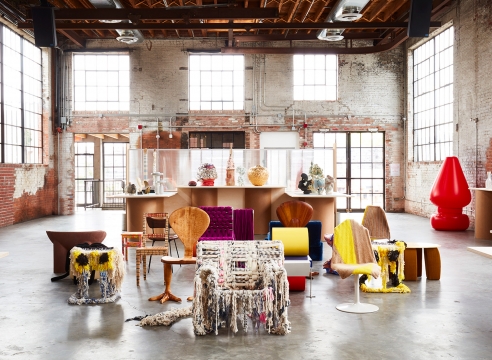