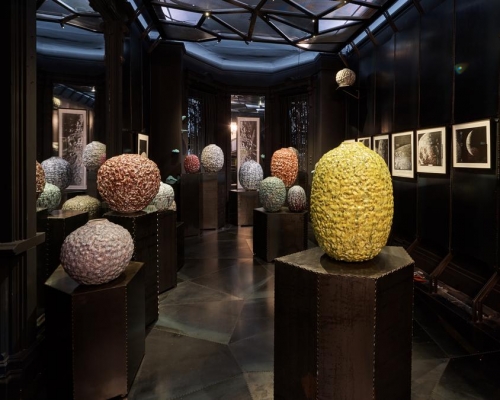 Jason Jacques Gallery is an American contemporary art gallery specializing in artists working in clay. Over it’s thirty year history, the gallery has both made its mark building museum collections of late 19th century European Art Pottery and become renowned for exhibiting some of the most exciting and influential international contemporary ceramic artists. Jason began his career in Europe three decades ago, combing through flea markets and antique shops for star pieces to send back to American dealers. He returned with a specialty in what he calls the Art Pottery Renaissance of the late-19th century— works by Lucien Lévy-Dhurmer, Ernest Chaplet, Clément Massier, Georges Hoentschel, and the like.

After an explosive work by Gareth Mason caught his eye in 2010, he launched a program in contemporary ceramics, the prime focus of the gallery today. By placing Kim Simonsson’s vivid, mossy figures, Katsuyo Aoki’s porcelain masterworks, and Beth Cavener’s animistic sculptures alongside the Japonist creations of Paul Jeanneney or the biomorphic inventions of Beate Kuhn, the gallery lends historical context to the contemporary talent on their roster.

Jason and his team now not only maintain a rigorous contemporary program, but work to foster new talent. The gallery’s mission is bolstered by careful attention to the history of ceramics and commitment to maintaining an ongoing dialogue with the medium’s rich past.

Jason Jacques Gallery hosts exhibitions, tours, and talks at their Madison Avenue space, located in a historic 1871 Upper East Side Manhattan townhouse, in addition to participating in an international array of art fairs in Miami, San Francisco, Dallas, New York, Maastricht, and Basel.

MONDAY - SATURDAY, 10AM - 6PM
AND BY APPOINTMENT